In 1972, | was a grad student, aged 22, and| was a script reader at the lowest rung of the ladder for the Yale Repertory Theater. | had just come to the East Coast for the first time in the fall of 1971. When I graduated in 1973, took a teaching job to support myself. In 1975 (check the postmark on the
envelope) I received a letter where | was working (my personal address was unknown to Yale) from the
next, newly appointed literary manager at the Yale Rep who must have been cleaning up the office as he began the job. The following attachments tell the story from another time – but | recognize my own
handwriting scribbling the author’s new phone number I had somehow found in pre-internet times (he
was no longer at the number in the letter) at the bottom of the handwritten letter he had written years before – one I had never received, And I have a very vague memory of speaking with the author to say that unfortunately I no longer had any connections to a theater. I was a teacher of undergraduates now at a small women’s college outside of NYC. I kept this correspondence and found it, to my surprise, 40 years later going through my very old office files The author’s current bio concludes this entry.

Looking back now at my report-“The Unfinished Saint PART ONE” (wonder what the page count was)
cast of 10 Black actors. “1 all-purpose” means only one set. Mr. Wrights bio today lists 30 plays that he has written but | find in a quick search, no productions. This was an open door for a more powerful dramaturg to shape a voice to the realities of the stage. Too bad | missed it. Too bad I did’t date the report. Too bad it took everyone so long to read and respond — you can see how infuriating this is to writers. Too bad the computer had not been invented and I was such a terrible typist. 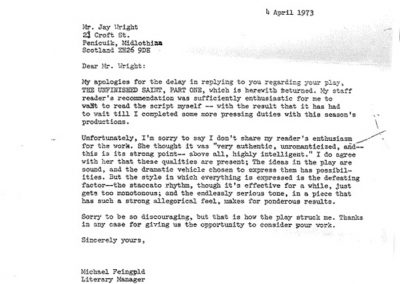 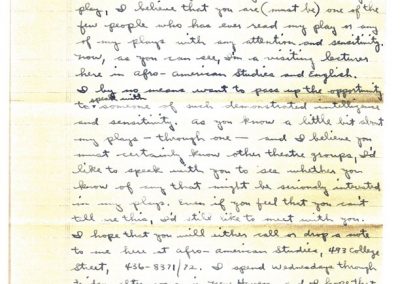 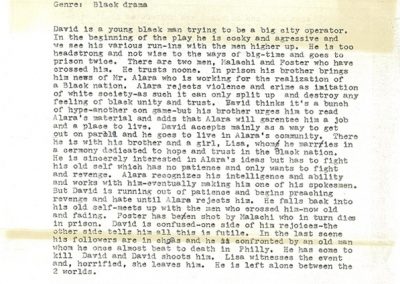 On May 25, 1934, Jay Wright was born in Albuquerque, New Mexico. He’s an African American playwright, poet, and essayist. He played professional baseball before studying comparative iterature at ‘the Unversity of California at Berkeley and Rutgers University.

About Wright’s work, critic Harold Bloom wrote, “As an immensely learned poet, Wright tries to defend
himself against incessant allusiveness by stripping his diction, sometimes to an astonishing sparseness…
His most characteristic art returns always to that commodious Iyricism I associate with American poetry
at it’s most celebratory in Whitman, In Stevens, in Crane, in Ashbery.”

‘Wright’ honors include the 2000 Lannan Literary Award for Poetry, an American Academy and institute
of Arts and Letters Literary Award, a Guggenheim Fellowship, a MacArthur Fellowship, an Ingram Merril
Foundation Award, a National Endowment for the Arts grant, a Rockefeller Brothers Theological
Fellowship, and the Oscar Willams and Gene Derwood Award.